about the project
memory
video
Glossary 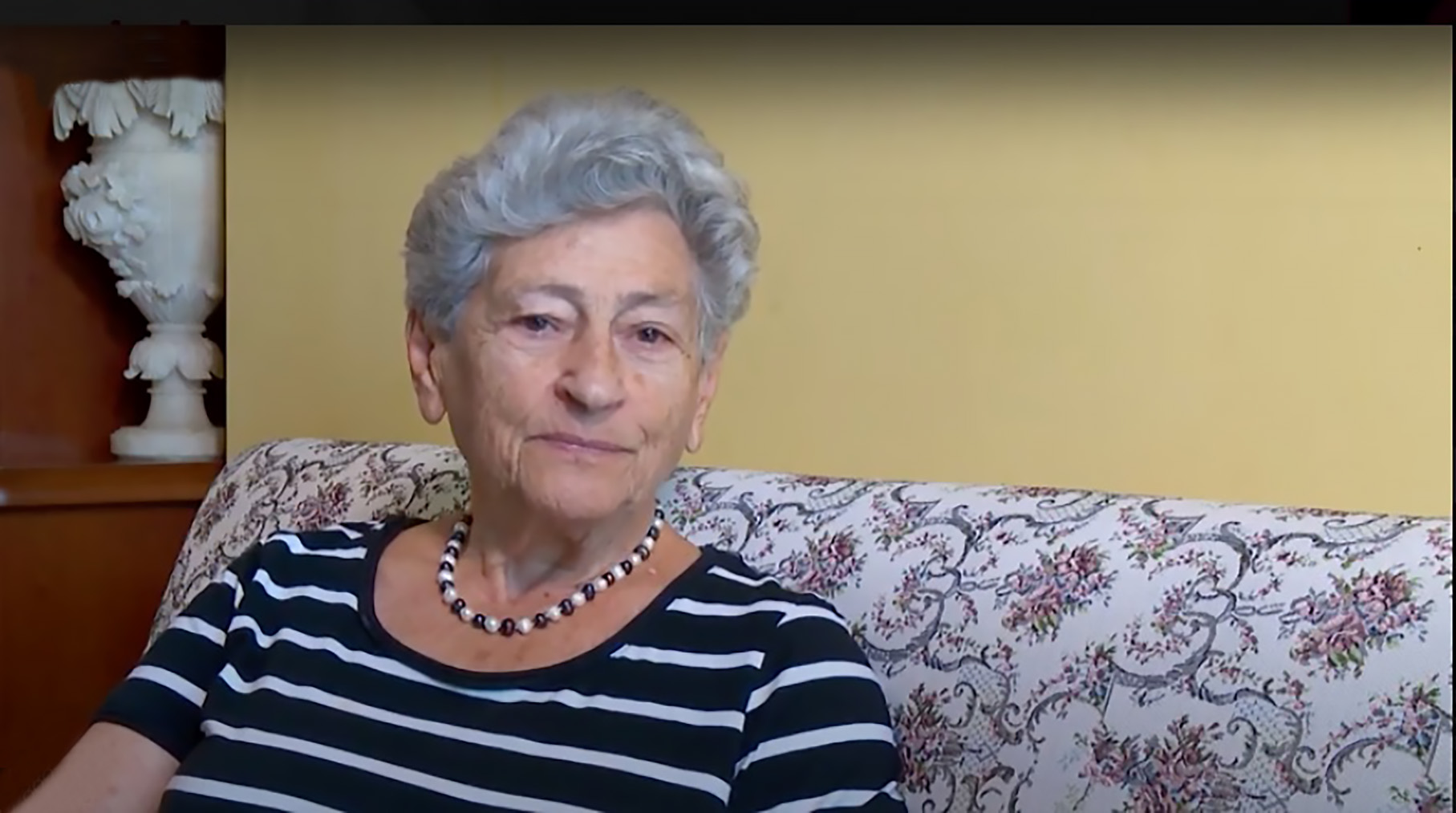 I was in hell

I was born in Warsaw as Hena Kuczer, daughter of Józef-Lejzor and Cyrla, the eighth and youngest child in the family. Six of my siblings had already reached adulthood (four brothers were married; one had two children). Only my brother who was a year and a half older and I were still children. My father operated a small carpenter’s shop which provided a modest source of support for our family. Our family was patriarchal and religious, observing all the laws of Moses. I remember festive Sabbath evening meals at a large table where, at the head, my father reigned with his beautiful long silver beard. We spoke Yiddish at home, although all the children spoke Polish as well. We had many books at home in the Polish language.

My happy childhood came to an end with the outbreak of the war in 1939. I was seven years old. When the ghetto was established, we were still able to remain for some time in our own apartment, since our building (at 10 Muranowski Square) was located within its confines. Our suffering began when the ghetto boundaries were narrowed. My family found a place on Miła Street. There, our hell began.

I remember quite accurately the events of those days, but above all, the pervasive fear in me, the pounding of my heart, fists clenched to the point of pain, trying desperately to cling to my mother’s dress.

During the searches and hunts, we sat in a hiding place fashioned inside the ventilation chimney. While Germans were plundering our apartment, we sat there holding our breath. Only the nights brought some peace. In July 1942, two of my married brothers were deported to Treblinka with their wives and children. They could not hide because their small children endangered the rest of the family.

After July 1942, my other brothers (Father was weak and demoralized), particularly the most adept and capable, Rafał, age twenty-four, began to organize and build a bunker, dug out below the basement level of our apartment building on Zamenhof Street. This bunker was to connect to the sewers through a tunnel several meters long. Construction lasted several months. Some provisions, medications, whatever could be secured in a starving ghetto, were assembled there. We transferred to the bunker shortly before the Warsaw Ghetto Uprising. In the bunker, in addition to our family, were about twenty people. As for children, there were only the two of us, my brother (age thirteen) and I (age eleven).

Three of my brothers were members of the Jewish Fighting Organization and took an active part in the uprising. We lived through the entire uprising in the bunker. When the uprising was suppressed, my brothers returned to the bunker. Around us, all was in flames. The temperature in the bunker was very high. To cool off, we entered the sewers, but the Germans were releasing poison gas there, and cadavers were floating in the sewage. The first days and weeks were horrible. The Germans were in a frenzy and hunted any Jews still hiding in the ruins. Many times, we would flee into the sewers, squeezing through a narrow tunnel. (Still many years after the war, in nightmares, I relived those escapes.) At that time, there was neither light nor water in the bunker.

Many people in our bunker couldn’t stand it and went out from the sewers straight into the bullets of Germans waiting by the manhole. Finally, convinced that they had killed the last Jew in the ghetto, the Germans calmed down a bit and stopped sniffing around and tracking so much. We settled down a little in the bunker. The walls cooled down somewhat, we organized ourselves for water and even electricity, and our molelike life, which was dormant during the day, proceeded under cover of night.

Thus, we survived  several  months,  but  even  our  starvation food rations came to an end at last. It became crucial that we resume contact with the outside world. One night, two of  our  young  girls exited through the sewers to the Aryan side. They were  to  make contact with some organization, and they succeeded. After a few days, the manhole became a point of contact, and we received some news of the world as well as a few provisions. Plans were made for gradually leaving the bunker (I do not know what organization helped us, but it was organized assistance).

But first, unfortunately, my brother, Rafał, left the bunker because he was seriously ill (with typhus or dysentery). We remained now without his leadership, and our situation collapsed. Our bunker was discovered. I don’t know whether it was by Germans or by looting Poles. Thus, two of my brothers, Izaak and Chaim perished, and we (my parents, very weak and sickly, my sister, my sister-in-law, my youngest brother, and I) managed, in terrible panic and fright, to seek shelter in the sewer canals. In the sewer, my thirteen-year-old brother took over the “command,” since he was somewhat acquainted with the canals. He had walked them frequently with his older brother.

We spent two days in the sewer, sitting on wooden boards, before we could establish contact with those “up above” and inform them of our situation. By night, men came to get us, but it turned out that “our” manhole had been soldered shut. We had to get to another manhole, making our way along a sewer canal with very rapidly flowing water. It was difficult to stay up on our feeble legs and not let the strong current carry us away. We attempted to brace ourselves with elbows against the slippery walls of the canal. All this was taking place in the dark by the faint light of a single flashlight hanging on the chest of our guide, thirteen-year-old little Idełe.

My parents had no strength for it. They came to a standstill under the soldered manhole. My twenty-three-year-old sister, Pola, who did not want to leave them alone, stayed with them. My mother then said, “You go ahead! Rafał is there, and he will for sure organize a rescue.” The rescue could not be arranged; they remained in the canal forever. But I emerged, after a nine-month stay in the bunker. It was September 1943. There were still four of us: brother Rafał, sister-in-law Anka (wife of Izaak Kuczer, murdered in the bunker), my youngest brother, thirteen-year-old Idł and I. All four of us were living corpses. We were carried out; no one was able to stand up on his own legs. We were packed into sacks and transported like merchandise to our new hiding place.

We settled in the cellar of a burned-out apartment building. They began feeding us. Unfortunately, within a short time (days? weeks?), my dear little brother died. They had even managed to bring a doctor, but help came too late. He was too weak and had a general infection which he had acquired in the sewer. Three of us were left. Rafał got involved in work for the underground. Having experience, he began construction of a tunnel to the sewer for the needs of a future uprising. My brother’s boss was “Antek” – Icchak Cukierman. I saw him when he came to our place and brought us weapons. While carrying out these assignments, my brother was denounced to the Germans by a man whom he trusted but who turned out to be a German collaborator.

Icchak Cukierman – one of the leaders of ŻOB and the Warsaw Ghetto Uprising, Cukierman survived the war and died in Israel in 1981.

Rafał perished, in January 1944, in the place of torture on Aleja Szucha, without disclosing the hiding place of my sister-in-law and myself. We then remained alone, my sister-in-law and I. We had to keep changing our location because each one of them eventually became unsafe. A woman would appear, each time a different one, and take us from one place to another, one at a time.

My sister-in-law was dressed in heavy mourning, and I had my head completely bandaged, because everything about us revealed our origins, most of all, my big terror-stricken eyes. Once, however, when they took me out into the street from a “burned” hiding place, a small group of children at play started shouting, “Oh, look, a Jew!” I quickly turned back with my guide and spent that night alone on some coal stored in the basement.

“a ‘burned’ hiding place” was one that was unsafe, discovered.

I do not know who the numerous people were who provided me with care, what their names were, or what organization they represented. Every month, we received money for subsistence. I don’t know the source from which it came. On the last occasion, it was brought by our contact, “Zosia”, in the morning hours of the first of August 1944. That afternoon, the Warsaw Uprising broke out. We went down to the underground shelter with everybody, and together with everyone, we were evacuated from Warsaw to a camp in Pruszków. Along the way, we encountered a group of children from an orphanage also being evacuated. My sister-in- law decided that the safest course for me was to be in a group of other children. The man looking after us asked the nuns about taking me. They accepted me, although not even for a moment did they have any doubts about my origins, especially since I was unable to produce any documents. My sister-in-law, from whom I separated in Pruszków, was deported to Germany for forced labor. She survived the war.

Thanks to the protective care extended to me by the nuns, I was able to successfully await the end of the occupation amid the other children in the orphanage (several of whom were Jewish girls). I was now a very grown-up thirteen-year-old adult.